House of Hope Board of Directors Appoints New Executive Committee 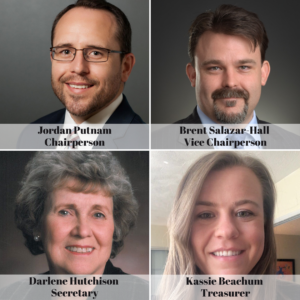 The House of Hope Board of Directors appointed its new Executive Committee in June. Each new officer will serve three years in their role to help advance House of Hope’s mission and objectives. In total, the four appointees have 20 years of experience serving on House of Hope’s Board of Directors. Coming from a variety of disciplines, from finance to law to public relations, the new Executive Committee will provide professional oversight and leadership for House of Hope staff and the community at large. Read on to learn more about each member and their experience!

Jordan Putnam has served as a member of the House of Hope Board of Trustees since 2018 and currently serves as the Chairperson of the Board. For the last seven years, he has practiced family and child welfare law in Utah. Jordan received his bachelor’s in Political Science from Brigham Young University (2007) and his Juris Doctor from the University of Utah (2011).

Jordan joined the Board because he had been very impressed with the excellent work House of Hope does in the community. He has seen many clients make dramatic life changes while at House of Hope, and he wanted to be a part of and contribute to such a wonderful organization. He also serves as a Board Member of Parental Defense Alliance of Utah.

Brent Salazar-Hall joined the House of Hope Board of Trustees in 2015 and currently serves as the vice chairperson. He works as an attorney and has been practicing in Utah since 2004. He received both his Juris Doctor degree and his bachelor’s in psychology from St. Louis University. As an attorney practicing in juvenile court, Brent joined the Board because he has seen the amazing and challenging work House of Hope does for mothers overcoming substance abuse. Brent also volunteers his time with the following organizations: Utah Father’s and Families Coalition, Utah State Bar, Family Law Section Executive Committee and Third District Pro Se Docket. He resides in Salt Lake City with his wife and two children.

Darlene C. Hutchison has been a member on the House of Hope Board since 2010 and currently serves as the board secretary. However, her concern reaches back much further. She served with the former Utah Alcohol Foundation and was one of the founders of a coalition directed toward bringing together all state and non-profit agencies to work together in developing reasonable alcohol policies, the Alcohol Policy Coalition.

Darlene’s adult life has been geared toward finding solutions for problems facing the community. Her service includes being President of the Utah Congress of Parents and Teachers (PTA), which provided her with the opportunity of serving on many national and state boards and committees relative to education and problems facing youth. She was an elected member of the Utah State Board of Education; served as President of the Women’s Legislative Council of Utah; an appointed member of the Utah Civil Rights Commission, and served her community on the Board of Adjustments. She has dedicated her time to many other organizations, especially those directed toward helping children and youth.

Kassie Beachum has served as a member of the House of Hope Board of Trustees and on the Finance committee since 2017 and currently serves as the board treasurer. She received a Bachelor of Science degree in Finance for Westminster College in 2017. She currently works as Senior Accountant for a tech firm in Sandy, Utah.

Kassie joined the Board because she is very impressed with the resources offered to the women that are a part of the program at House of Hope. Growing up in a small town in North Carolina that had limited resources she got to see firsthand what life can be like for individuals that find themselves in tough situations without programs like these to offer help.

Next >
See All Posts
< Previous